Outstanding women researchers who have made fundamental contributions to computing

This award celebrates women researchers who have made fundamental contributions to Computer Science.  Each year ACM honors a preeminent woman computer scientist as the Athena Lecturer. The recipient gives an invited talk at a major ACM conference of her choice. A video of the talk is made available on the ACM website.  The award carries a cash prize of $25,000.  Financial support for the Athena Lecturer Award is provided by Two Sigma.

ACM has named Sarit Kraus of Bar-Ilan University the 2020-2021 ACM Athena Lecturer for foundational contributions to artificial intelligence, notably to multi-agent systems, human-agent interaction, autonomous agents and nonmonotonic reasoning, and exemplary service and leadership in these fields. Her contributions span theoretical foundations, experimental evaluation, and practical applications. Multi-agent systems are regarded as vital to the increasingly complex challenges within artificial intelligence and have broad applications in a number of areas.

Kraus is recognized as one of the world’s leading researchers in multi-agent systems, in which a distributed group of agents (computers, robots, and/or humans) interact and work collaboratively to solve problems. Beyond her work in multi-agent systems, Kraus has made significant contributions to knowledge representation (another area of artificial intelligence research) by incorporating nonmonotonic reasoning, and to randomized policies for security applications by combining methods from game theory, machine learning and optimization. Kraus is also recognized for her service to the field as an outstanding educator and mentor, as well as for her conference, editorial, and leadership roles.

Initiated in 2006, the ACM Athena Lecturer Award celebrates women researchers who have made fundamental contributions to computer science. The award carries a cash prize of $25,000, with financial support provided by Two Sigma. The Athena Lecturer gives an invited talk at a major ACM conference of her choice.

“Each year, it is ACM’s honor to put a spotlight on the instrumental role that women play in the computing field by selecting an Athena Lecturer,” said ACM President Cherri M. Pancake. “The ability of multi-agent systems to effectively work together is at the core of AI research and will be the lynchpin of many of the technologies that will shape the future. With seminal work in AI stretching back to the early 1990s, it is fair to say that Sarit Kraus has introduced new ways of thinking in multi-agent systems research, while also shepherding research ideas into practical applications. Her colleagues also cite her generosity and sensitivity in mentoring the next generation of researchers, which aligns perfectly with our mission in bestowing this particular award.”

In a multi-agent system (MAS), a distributed network of agents (which could include computers or humans) work together to solve a problem that is beyond the capacity of a single agent. For example, if two autonomous vehicles were approaching an intersection, the software systems (agents) in each vehicle would communicate with each other via sensors, and perhaps a central computer coordinating traffic in the neighborhood in order to ensure the vehicles would not collide. Multi-agent systems are increasingly used in a wide range of areas, from Internet of Things (IoT) applications like smart cities, supply-chain management, smart electric grids, robotics, and online trading to many mobile computing services.

The focus of Kraus’s research in multi-agent systems has been to develop intelligent agents that can interact proficiently with each other and with people, in both cooperative and conflicting scenarios. As with other areas of AI, this work requires an understanding of human behavior and decision-making in order to develop models for how the agents will make decisions. Toward this goal, Kraus developed innovative methods combining machine learning techniques for human modeling, formal decision-making and game theory approaches to enable agents to interact well with people. In a series of seminal papers, Kraus developed formal models of agent interaction that have been used in several practical applications including the ARMOR project, which combines game theory and optimization methods to improve robotics security at venues such as the Los Angeles International Airport; the Sheba Project, which deploys machine-learning techniques to facilitated training and rehabilitation (including speech therapy) at hospitals in Israel; developing a virtual suspect, integrating psychological models and machine learning, to enhance law enforcement training; recommendation systems for smart cars; and developing an automated mediator for use in studies on the influence of different mediation types on intra- and inter-country negotiations.

Kraus’s work in multi-agent systems also includes the shared plans framework for collaborative planning and acting, models of coalition formation, automated negotiation, and culture-sensitive agents. For example, her 1996 paper, co-authored with Barbara Grosz, “Collaborative plans for complex group action,” provided a framework for investigating fundamental questions about how agents collaborate and has been especially influential in the development of MAS research, having been cited nearly 1,400 times.

Kraus is recognized as a world leader in a subfield of multi-agent systems called automated negotiation, in which the goal is to build computers that can reach agreements with other computers, negotiate on behalf of humans, or perhaps do a better job than human negotiators. Automated negotiation systems are designed to operate without any human intervention. Automated negotiation especially comes into play in economic domains and has garnered increasing interest with the rise of e-commerce applications. As with her broader work within multi-agent systems, Kraus designed models and protocols for automated negotiation algorithms that she introduced in dozens of seminal papers stretching back to the early 1990s. Kraus is a co-author (with Michael Wooldridge and Shaheen Fatima) of the book Principles of Automated Negotiation, a state-of-the-art treatment of the subject.

Nonmonotonic Reasoning
In designing artificially intelligent systems, researchers seek to simulate the logic humans use to make assumptions about the world, even in the face of incomplete or new information. In the traditional example, if a human is told that an animal is a bird, the human will logically assume that it can fly. However, when the human is informed that the bird is a penguin, which cannot fly, the human must adjust his/her logic to allow for potential exceptions to the general rule “all birds fly.” In artificial intelligence, nonmonotonic reasoning refers to the ability of a system to take back conclusions when initial assumptions were incorrect and/or new information is given. Nonmonotonic systems are also designed to reach new/alternative conclusions in these instances. Kraus was the lead author (with Daniel Lehmann and Menachem Magidor) of the landmark 1990 paper “Non-monotonic Reasoning, Preferential Models and Cumulative Logics,” which has been recognized as a highly useful attempt to provide theoretical foundations for nonmonotonic logic that could be used in AI systems. Kraus’s subsequent publications in nonmonotonic logic have shaped the development of this important subfield of AI and opened up new lines of research.

Service to the Field and Mentoring
Over the years, Kraus has served the research community by taking on many volunteer roles. She has been a General, Program or Workshop Chair for several leading AI conferences including IJCAI, ICMAS, AAMAS, and ECAI. Currently, she is serving on the editorial boards of the Journal of Artificial Intelligence Research, Journal of Autonomous Agents and Multi-agent Systems, and Annals of Maths & AI. As an educator and mentor, she has supervised 62 Master’s students and 34 PhD students. In the spirit of the ACM Athena Lecturer Award, Kraus is also a recognized leader in efforts to increase the participation of women in science.

Biographical Background
Sarit Kraus is a Professor of Computer Science at Bar-Ilan University in Ramat Gan, Israel, where her research is focused on intelligent agents and multi-agent systems. She received her Bachelor’s, Master’s and PhD degrees from The Hebrew University of Jerusalem.

Kraus has written six books, 122 journal articles, and 176 conference papers, and has received nine patents. Twelve of her publications have won best paper awards and two have won the IFAAMAS Influential Paper Award. She is a Fellow of ACM, the European Association for Artificial Intelligence (EurAI), and the Association for the Advancement of Artificial Intelligence (AAAI). Her honors include receiving the IJCAI Computers and Thought Award in 1995, the ACM SIGART Autonomous Agents Research Award in 2007, and the prestigious Israel EMET Prize in 2010. 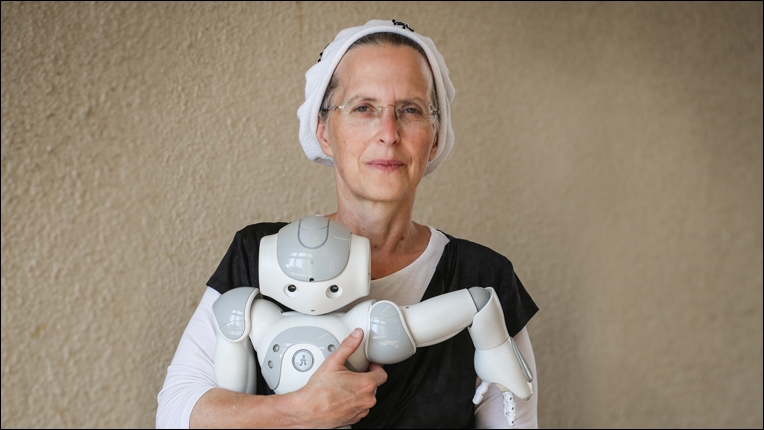