The Gordon Bell Prize is awarded each year to recognize outstanding achievement in high-performance computing. The purpose of the award is to track the progress over time of parallel computing, with particular emphasis on rewarding innovation in applying high-performance computing to applications in science, engineering, and large-scale data analytics. Prizes may be awarded for peak performance or special achievements in scalability and time-to-solution on important science and engineering problems. Financial support of the $10,000 award is provided by Gordon Bell, a pioneer in high-performance and parallel computing.

Quantum supremacy is a term used to denote the point at which a quantum device can solve a problem that no classical computer can solve in a reasonable amount of time. Teams at Google and the University of Science and Technology of China in Hefei both claim to have developed devices that have achieved quantum supremacy.

According to the Gordon Bell Prize recipients, determining whether a device has achieved quantum supremacy for a given task (in a specific scenario) begins with sampling the interactions of the different quantum bits (qubits) in a random quantum circuit (RQC). As the number of possible interactions among qubits in a random quantum circuit is staggeringly large, simulating their interactions is a problem well-suited for a high-performance computer. However, the quantum physics behind the entangled qubits requires that the classical binary bits used in a supercomputer store and compute the information with exponentially-increasing complexity.

In their Gordon Bell Prize-winning work, the Chinese researchers introduced a systematic design process that covers the algorithm, parallelization, and architecture required for the simulation. Using a new Sunway Supercomputer, the Chinese team effectively simulated a 10x10x (1+40+1) random quantum circuit (a new milestone for classical simulation of RQC). Their simulation achieved a performance of 1.2 Eflops (one quintillion floating-point operations per second) single-precision, or 4.4 Eflops mixed-precision, using over 41.9 million Sunway cores (processors).

The project far outpaced state-of-the-art approaches to simulating an RQC. For example, the most recent effort, using the Summit supercomputer to simulate a random quantum circuit of the Google Sycamore quantum processor (which has 53 qubits), was estimated to take 10,000 years to perform. By contrast, the Chinese team’s approach employing the Sunway supercomputer takes only 304 seconds for a simulation of similar quantum complexity.

The Chinese team explained that they undertook this challenge because achieving real-time simulation of an RQC using a supercomputer would aid both in the development of quantum devices and in bringing algorithmic and architectural innovations within the traditional supercomputing community.

The ACM Gordon Bell Prize tracks the progress of parallel computing and rewards innovation in applying high performance computing to challenges in science, engineering, and large-scale data analytics. The award was presented today by former ACM President Cherri M. Pancake and Professor Mark Parsons, Chair of the 2021 Gordon Bell Prize Award Committee, during the International Conference for High Performance Computing, Networking, Storage and Analysis (SC21), which was held in St. Louis, Missouri, and virtually for those who could not attend.

The 2021 ACM Gordon Bell Special Prize for High Performance Computing-Based COVID-19 Research was presented to a six-member team for their project Digital transformation of droplet/aerosol infection risk assessment realized on “Fugaku” for the fight against COVID-19. The Prize is being awarded in 2020 and 2021 to recognize outstanding research achievement toward the understanding of the COVID-19 pandemic through the use of high performance computing. The award was presented at the hybrid SC21 conference. 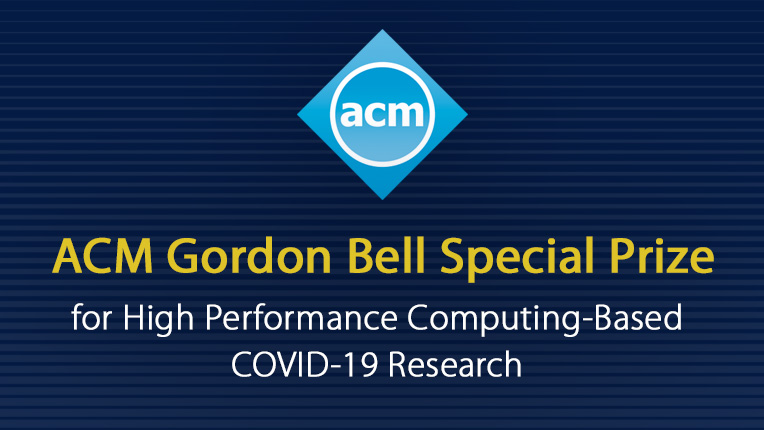