The Gordon Bell Prize is awarded each year to recognize outstanding achievement in high-performance computing. The purpose of the award is to track the progress over time of parallel computing, with particular emphasis on rewarding innovation in applying high-performance computing to applications in science, engineering, and large-scale data analytics. Prizes may be awarded for peak performance or special achievements in scalability and time-to-solution on important science and engineering problems. Financial support of the $10,000 award is provided by Gordon Bell, a pioneer in high-performance and parallel computing.

The ETH Zurich team introduced DaCe OMEN, a new framework for simulating the transport of electrical signals through nanoscale materials (such as the silicon atoms used in transistors). To better understand the thermal properties of transistors, the team simulated how electricity would be transported through a two-dimensional slice of transistor consisting of 10,0000 atoms. The ETH Zurich researchers simulated the 10,000-atom system 14 times faster than an earlier framework that was used for a 1,000-atom system. The DaCe OMEN code they developed for the simulation has been run on two top-6 hybrid supercomputers, reaching a sustained performance of 85.45 Pflop/s on 4,560 nodes of Summit (42.55% of the peak) in double precision, and 90.89 Pflop/s in mixed precision.

Today’s commercial microchips contain 100,000,000 transistors in the span of a single millimeter, and managing heat generation and dissipation is one of the central problems in computer architecture. As the transistors on each microchip have become smaller and more densely packed, the amount of heat they generate has steadily increased. The cooling systems needed to keep supercomputers and data centers from overheating have become increasingly expensive. They estimate that cooling can consume up to 40% of the total electricity needed for data centers, amounting to cumulative costs of many billions of dollars per year.

Today’s supercomputers, which can perform up to 200 quadrillion calculations per second, allow scientists in many disciplines to gain new insights by processing a staggering number of variables. The ETH Zurich team used their simulation to develop a map of where heat is produced in a single transistor, how it is generated and how it is evacuated. It is hoped that a deeper understanding of these thermal characteristics could inform the development of new semiconductors with optimal heat-evacuating properties.

In recent years, the OMEN framework has been a popular quantum transport simulator for modeling nanoscale materials, but has experienced scaling bottlenecks. The ETH Zurich Team wrote a variation of OMEN that is Data Centric (DaCe OMEN). “We show that the key to eliminating the scaling bottleneck is in formulating a communication-avoiding algorithm,” the team writes in their paper. The ETH Zurich team’s solver yields data movement characteristics that can be used for performance and communication modeling, communication avoidance, and dataflow transformations. They go on to note that the speedup made by the DaCe OMEN framework is two orders of magnitude faster per atom than the original OMEN code.

The ETH Zurich team also built a graphical interface for the DaCe OMEN framework that includes a visualization of dataflow in lieu of a simple textual description. Anyone running the code can use the image representation to interact with the data directly. The team believes this new innovation could be applied to numerous scientific disciplines beyond nanoelectronics.

A six-member research team from ETH Zurich was awarded the 2019 ACM Gordon Bell Prize for introducing DaCe OMEN, a new framework for simulating the transport of electrical signals through nanoscale materials, such as the silicon atoms used in transistors. The award for their project, “A Data-Centric Approach to Extreme-Scale Ab initio Dissipative Quantum Transport Simulations,” was bestowed during the SC19 supercomputing conference. 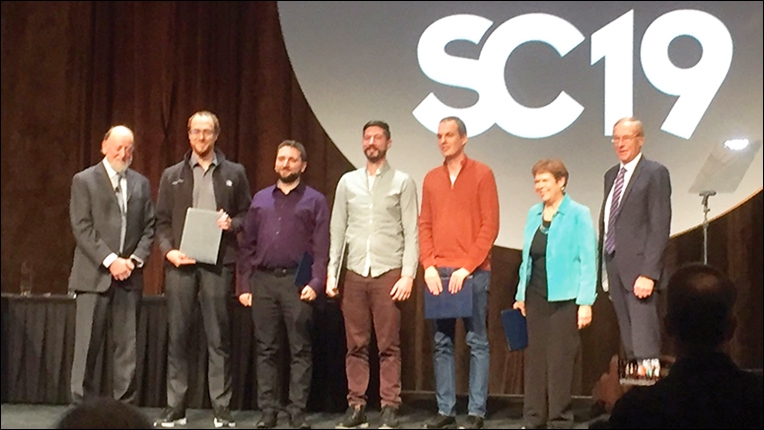