Theoretical accomplishments that have had a significant, demonstrable effect on the practice of computing

The Paris Kanellakis Theory and Practice Award honors specific theoretical accomplishments that have had a significant and demonstrable effect on the practice of computing. ThIs award is accompanied by a prize of $10,000 and is endowed by contributions from the Kanellakis family, with additional financial support provided by ACM's Special Interest Groups on Algorithms and Computational Theory (SIGACT), Design Automation (SIGDA), Management of Data (SIGMOD), and Programming Languages (SIGPLAN), the ACM SIG Projects Fund, and individual contributions.

Differential privacy is a definition and framework for reasoning about privacy in statistical databases. While the privacy of individuals contributing to a dataset has been a long-standing concern, prior to the Kanellakis recipients’ work, computer scientists only knew how to mitigate several specific privacy attacks via a disparate set of techniques. The foundation for differential privacy emerged in the early 2000’s from several key papers. At the ACM Symposium on the Principles of Database Systems (PODS 2003) Dinur and Nissim presented a paper which showed that any technique that allows reasonably accurate answers to a large number of queries is inherently non-private.

Later, a sequence of papers by Dwork and Nissim at the International Conference on Cryptology (Crypto 2004); as well as Blum, Dwork, McSherry, and Nissim at the ACM Symposium on the Principles of Database Systems (PODS 2005); and Dwork, McSherry, Nissim, and Smith at the Theory of Cryptology Conference (TCC 2006) further defined and studied the notion of differential privacy.

These separate but related papers formed a definition of differential privacy which captures the kind of privacy needed in statistical settings, where individual information must be protected while still allowing for discovery of common trends. These fundamental works created a vibrant and multidisciplinary area of research, leading to practical deployments of Differential Privacy in industry and by the U.S. Census Bureau, among other applications.

Contributors to the Development of Differential Privacy Receive Kanellakis Award 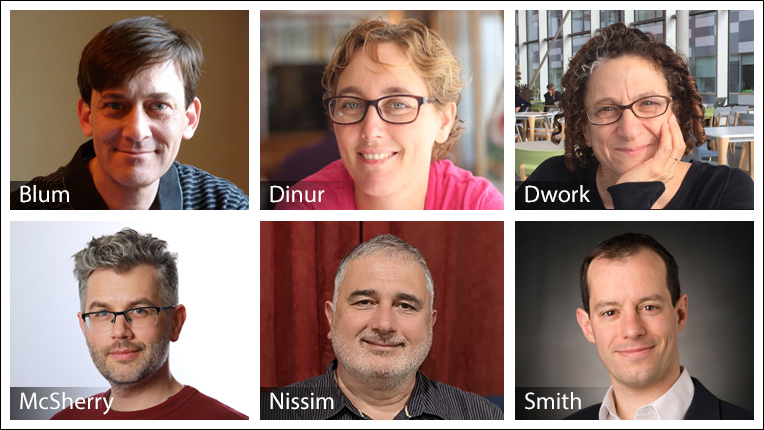