ACM named Alexei A. Efros of the University of California, Berkeley  the recipient of the 2016 ACM Prize in Computing. Efros was cited for groundbreaking data-driven approaches to computer graphics and computer vision. A focus of his work has been to understand, model and recreate the visual world around us. Efros is a pioneer in combining the power of huge image datasets drawn from the Internet with machine learning algorithms to foster powerful image transformations and valuable research findings. He has also made fundamental contributions in texture synthesis, a technique that ushered in new horizons in computer graphics and is widely used in the film industry.

“It’s estimated that 1.8 billion images are uploaded to social media platforms worldwide every day,” explained ACM President Vicki L. Hanson. “This ocean of visual data provides great opportunities and some obvious challenges. In the area of artificial intelligence, for example, the ability to rapidly process huge quantities of photos or video stills can help a computer to recognize and identify patterns. Alexei Efros has consistently found pioneering ways to understand and create images using data-based tools that he has developed. His work underscores the exciting possibilities of this field and wonderfully exemplifies the criteria of ‘fundamental contributions’ and ‘broad implications’ that the ACM Prize award committee looks for.”

“Infosys is proud through its support of the ACM Prize in Computing to recognize Dr. Alexei Efros as a researcher who is passionate about understanding, reimagining and recreating the visual world around us,” said Dr. Vishal Sikka, CEO of Infosys. “In an increasingly digital world, Dr. Efros is showing us how artificial intelligence, machine learning, and data-driven computing are fundamentally reshaping the way the world is perceived by computers, and as a result, amplifying the way we as human beings understand our world. The new insights that his research has produced present a seemingly limitless number of potential applications in areas like computer graphics and computational photography, as well as robotics, visual data mining, and even the interaction between the visual arts and the humanities. Dr. Efros’ relentless pursuit of finding the great new problems of our digital future can inspire all of us to be more, and to see more, in everything that we do.”

Efros first gained wide recognition in the area of computer graphics with his 1999 paper, “Texture synthesis by non-parametric sampling,” co-authored with Thomas K. Leung. Texture synthesis is the process of taking a small sample of a digital image and then applying an algorithm to the sample’s structural content to enlarge the image, create background images, or perhaps fill in holes. Prior to Efros’ paper, the methods of synthesizing digital textures involved complicated mathematics and didn’t often produce visually appealing results. Efros and Leung showed that a new “non-parametric” approach could be used to easily produce visually appealing textures. Non-parametric modeling has revolutionized the field, being cited in nearly 3,000 research papers and benefiting the entertainment industry, where Efros’ insights have been employed in 3-D computer graphics, digital image editing, and post production of films.

Among the many other areas in which Efros has developed a groundbreaking approach to research that others have followed, is the development of algorithms to scan vast collections of photographs from the Internet. In their 2008 paper, “Scene Completion Using Millions of Photographs,” Efros and James Hays presented a new algorithm that patches up holes in images by finding similar images drawn from a database of millions of photographs gathered from the Web. This approach was revolutionary, and today researchers regularly use algorithms to scan millions of images drawn from social media platforms for image processing and recognition research.

Continuing in this vein of research, Efros has undertaken several deep learning projects that have shown a high success rate of translating an image of one kind to another. For example, in their recent paper “Colorful Image Colorization,” Efros, along with Richard Zhang and Phillip Isola, presented a new algorithm that automatically translates black-and-white photographs into color. Using the input of a black-and-white photo, the algorithm is trained on 1 million images from the Imagenet dataset to make a plausible estimate of the color of the different elements in a photograph. And in the paper “Image to Image Translation with Conditional Adversarial Nets,” Efros, along with Phillip Isola, Jun-Yan Zhu and Tinghui Zhou showed that the interplay of two networks—one continually drawing new images and another judging whether the images generated look natural—can produce surprising image translations. For example, accurate street maps can be created using aerial photographs, and virtual photographs of handbags can be produced from an outline drawing.

Other well-received projects employing similar techniques include: “A Century of Portraits: A Visual Historical Record of American High School Yearbooks,” wherin Efros, Shiry Ginosar and co-authors trained an algorithm on 37,000 photographs to examine the defining style elements, trends and social norms of various decades. In the Communications of the ACM article What Makes Paris Look Like Paris?, Efros and co-authors outlined a machine vision approach to developing a program that could scan thousands of photographs of close-up architectural details of a city, identify very subtle differences between the architectural details, and determine the city in which a given photo was taken. 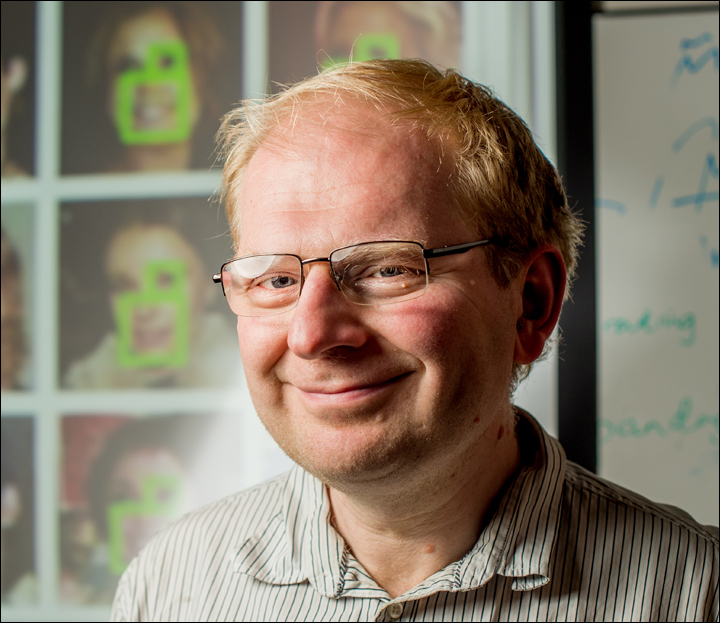 Efros is the author of over 100 scholarly publications on topics including computer vision, computer graphics and artificial intelligence. His papers have been cited more than 20,000 times by other researchers. Efros is a Sloan Fellow and a Guggenheim Fellow, and received the ACM SIGGRAPH Significant New Researcher Award and the IEEE PAMI Helmholtz Test of Time Prize, among other honors.