ACM named Shwetak Patel of the University of Washington and Google the recipient of the 2018 ACM Prize in Computing for contributions to creative and practical sensing systems for sustainability and health. Before Patel’s work, most systems for monitoring energy and health required expensive and cumbersome specialized devices, precluding practical widespread adoption. Patel and his students found highly creative ways to leverage existing infrastructure to make affordable and accurate monitoring a practical reality. Patel quickly turned his team’s research contributions into real-world deployments, founding companies to commercialize their work.

The ACM Prize in Computing recognizes early-to-mid-career computer scientists whose research contributions have fundamental impact and broad implications. The award carries a prize of $250,000, from an endowment provided by Infosys Ltd.

“Despite the fact that he is only 37, Shwetak Patel has had significant impact on the field of ubiquitous computing for nearly two decades,” said ACM President Cherri M. Pancake. “His work has ushered in some really exciting possibilities in the areas of sustainability and health. The widespread adoption of systems where individuals can monitor their health with smartphones could revolutionize health care—especially in the developing world. Shwetak Patel certainly exemplifies the ACM Prize’s goal of recognizing work with ‘fundamental impact and broad implications.’”

“Infosys is proud to support the ACM Prize in Computing, which this year recognizes Shwetak Patel for his trailblazing work in ubiquitous computing,” said Pravin Rao, COO of Infosys. “Beyond breaking new conceptual ground through research in many areas, Shwetak Patel is especially adept at rapidly bringing his ideas to the public via new products that are accessible and affordable. Patel’s vision for ubiquitous computing is to enhance our everyday world with sensing, data processing and computation. The way in which his digital health initiatives combine AI with sensors and mobile computing is also very exciting and will likely have a significant impact on health care around the world for many years to come.”

Patel’s research closed the gap between science fiction and reality in many applications in ubiquitous computing for sustainability and health.

Monitoring Energy and Water Usage in the Home

With the emergence of embedded computing systems over the past few decades, a longstanding goal has been to use embedded devices to gain a more fine-grained understanding of home water and energy usage than is available by simply reading a monthly utility bill. In industry, one proposed solution has been to develop “smart appliances” in which items such as refrigerators or televisions would be fitted with special meters so that that their energy consumption could be monitored. Rather than having smart devices throughout the home, each with its own meter, Patel recognized that a home’s electrical system (and later its plumbing system) can be reconsidered as a network capable of capturing and transmitting information. Patel’s insight was that each appliance, as it uses power, generates and transmits information as “noise” (perturbations) on the circuit. Patel then developed a method to “disambiguate” (separate and catalog) which rooms, appliances, and times of day energy was being used. Patel engineered the system so that an entire home could be monitored with just one meter for electricity and one meter for plumbing. Zensi, Inc., the startup he formed to commercialize his work, was sold to Belkin, which subsequently opened a 25-person R&D lab in Seattle to conduct further sustainability research alongside Patel in his team. In developing these products, Patel also became an electrician and plumber.

Building on his work on sustainability in residential environments, Patel next developed a new approach for wireless sensor nodes in the home, which dramatically reduced power consumption of each node while continuing to cover the whole home. Patel’s Sensor Nodes Utilizing Powerline Infrastructure (SNUPI) nodes contain an ultra-low-power transmitter that extends its range by coupling its wirelessly transmitted signal to the existing powerlines. SNUPI was a core component of Patel’s next startup, WallyHome. Through its network of low-powered sensors WallyHome monitors temperature, humidity and any potential water leakages. For example, if an event(such as a dishwasher leak) occurs in the home, the homeowner will receive an instant text on their mobile phone. While WallyHome was purchased by Sears Holding Company in 2015, Patel’s research in smart home sensing has informed much of the growing smart home industry, including companies like Google, Next, and Samsung.

More recently, Patel has leveraged sensors already on mobile phones (such as cameras and microphones) for physiological sensing and the management of chronic diseases. These technologies include SPiroSmart and CoughSense, which monitor lung function; BiliCam, which detects neonatal jaundice in newborns; HemaApp, which monitors hemoglobin levels; OsteoApp, to screen for osteoporosis; and BPSense, which monitors blood pressure. Patel has been working closely with Bill Gates and the Gates Foundation to share these technologies throughout the developing world. His work using a microphone for respiratory monitoring has already been deployed in parts of India and Bangladesh, and HemaApp is being used in Peru to screen for childhood anemia. He also commercialized some of these technologies, which were acquired by Google.

Patel will formally receive the ACM Prize in Computing at ACM’s annual awards banquet on June 15, 2019 in San Francisco. 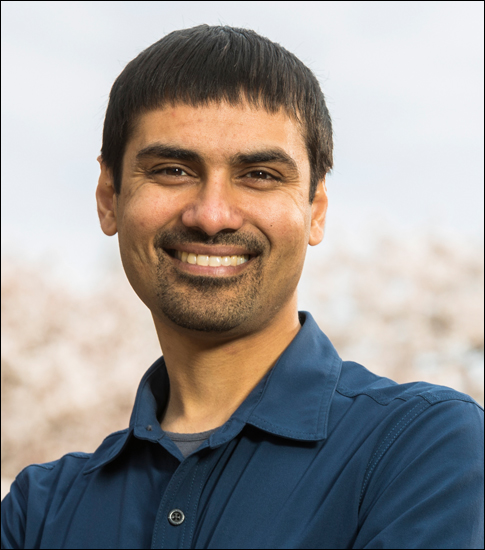 Shwetak N. Patel is the Washington Research Foundation Entrepreneurship Endowed Professor in Computer Science and Engineering at the University of Washington, where he directs the Ubicomp Lab, which develops innovative sensing systems for real-world applications in health, sustainability and novel interactions. He is also a director at Google working on health care. Patel earned his Bachelor’s and PhD degrees in Computer Science from Georgia Institute of Technology. His numerous honors include receiving a MacArthur Fellowship, a Sloan Fellowship, a Presidential Early Career Award for Scientists and Engineers (PECASE), MIT TR-35 Award, and a National Academy of Engineering Gilbreth Award. Patel is a Fellow of ACM.

In his debut lecture at the 7th Heidelberg Laureate Forum, Patel describes a collection of research projects conducted with his clinical collaborators that leverage the sensors on mobile devices (such as microphones, cameras, and accelerometers) in new ways to enable the screening, self-management and longitudinal study of diseases.