ACM has named Ayanna Howard, dean of The Ohio State University College of Engineering, as the 2021-2022 ACM Athena Lecturer. Howard is recognized for fundamental contributions to the development of accessible human-robotic systems and artificial intelligence, along with forging new paths to broaden participation in computing through entrepreneurial and mentoring efforts. Her contributions span theoretical foundations, experimental evaluation, and practical applications.

Howard is a leading roboticist, entrepreneur, and educator whose research includes dexterous manipulation, robot learning, field robotics, and human-robot interaction. She is a leader in studying the overtrust that people place in robots in various autonomous decision-making settings. In addition to her stellar research record, Howard has a strong record of service that demonstrates her commitment to advancing the field and broadening participation.

“Ayanna Howard is a trailblazer in vital research areas, including topics such as trust and bias in AI, which will continue to be front-and-center in society in the coming years,” said ACM President Gabriele Kotsis. “The quality of her research has made her a thought leader in developing accessible human-robot interaction systems. Both as an entrepreneur and mentor, Ayanna Howard has worked to increase the participation of women and underrepresented groups in computing. For all these reasons, she is precisely the kind of leader ACM seeks to recognize with the Athena Lecturer Award.”

Terrain Classification of Field Robots
Terrain classification is critical for many robots operating in unstructured natural field environments, including navigating the Arctic or determining safe landing locations on the surface of Mars. Howard’s work introduced fuzzy logic methods to model environmental uncertainty that advanced the state of the art in field robotics, including finding evidence of never-before-observed life on Antarctica’s sea floor.

Robotics for Children with Special Needs
Howard studied the ways in which socially-effective robots could improve the access and scalability of services for children with special needs, as well as potentially improve outcomes through the engaging nature of robots. In adapting her contributions to real-world settings for assistive technology for children, her work has also provided first-of-its-kind computer vision techniques that analyze the movement of children to devise therapeutic measures.

Overtrust in Robotics and AI Systems
Howard is a leader in modeling trust among humans, robots and AI systems, including conversational agents, emergency response scenarios, autonomous navigation systems, child-robot interaction, and the use of lethal force. Her work introduced human-robot interaction algorithms that, for the first time, quantified the impact of robot mistakes on human trust in a realistic, simulated, and very high-risk scenario. This work has led to better understanding of the biases and social inequities underlying AI and robotic systems.

BROADENING PARTICIPATION/SERVICE TO THE FIELD

Howard has created and led numerous programs designed to engage, recruit, and retain students and faculty from groups that are historically underrepresented in computing, including several NSF-funded Broadening Participation in Computing initiatives. She was the principal investigator for (PI)/co-PI for Popularizing Computing in the Mainstream, which focused on creating interventions to engage underrepresented groups in the computing field; Advancing Robotics for Societal Impact Alliance , an initiative to provide mentorship to computer science faculty and students at Historically Black Colleges and Universities (HBCUs); and Accessible Robotic Programming for Students with Disabilities, an initiative to engage middle- and high school students with disabilities in robotics-based programming activities. She also led and co-founded efforts to broaden participation in the field through the IEEE Robotics PhD Forum and the CRA-WP Graduate Cohort Workshop for Inclusion, Diversity, Equity, Accessibility, and Leadership Skills.

As part of her service to the field, Howard has held key roles on various editorial boards and conference/program committees. Some of her more high-profile efforts have included co-organizing the AAAI Symposium on Accessible Hands-on AI and Robotics Education, the International Joint Conference on Neural Networks, the International Conference on Social Robotics, and the IEEE Workshop on Advanced Robotics and Its Social Impacts. 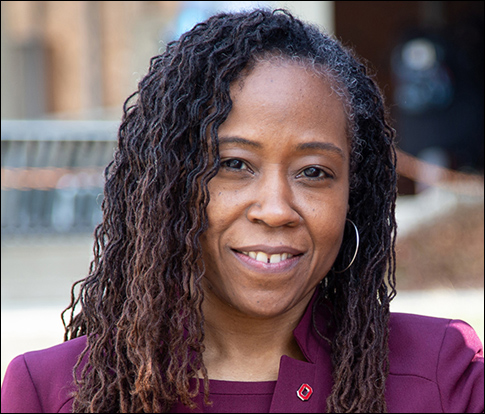 Ayanna Howard is the Dean of the College of Engineering at The Ohio State University. She is the first woman to lead the College of Engineering at Ohio State. Prior to joining Ohio State, Howard was the Linda J. and Mark C. Smith Professor and Chair of the School of Interactive Computing in the College of Computing at the Georgia Institute of Technology, where she founded and was Director of the Human-Automation Systems Lab (HumAnS). She is also founder and President of the Board of Directors of Zyrobotics, a company that develops mobile therapy and educational products for children with special needs.

A graduate of Brown University, Howard earned her MSEE and PhD in Electrical Engineering from the University of Southern California. She also earned an MBA from Claremont University’s Drucker School of Management.

Howard has authored 250 publications in refereed journals and conferences, including serving as co-editor/co-author of more than a dozen books and/or book chapters. She has also been awarded four patents and has given over 140 invited talks and/or keynotes. She is a Fellow of the Association for the Advancement of Artificial Intelligence (AAAI) and the Institute of Electrical and Electronics Engineers (IEEE). Among her many honors, Howard received the Computer Research Association’s A. Nico Habermann Award and the Richard A. Tapia Achievement Award.