ACM has named Éva Tardos, a Professor at Cornell University, as the 2022-2023 ACM Athena Lecturer. Tardos is recognized for fundamental research contributions to combinatorial optimization, approximation algorithms, and algorithmic game theory, and for her dedicated mentoring and service to these communities. Initiated in 2006, the ACM Athena Lecturer Award celebrates women researchers who have made fundamental contributions to computer science.

Tardos is one of the most influential leaders in the field of theoretical computer science. Her impact spans deriving deep theoretical results, shaping new research areas, and influencing a broad range of applications. Her key contributions in combinatorial optimization include the first strongly polynomial-time algorithm for the minimum-cost flow problem (for which she received the Fulkerson Prize) and a general framework for fast approximation of packing and covering linear programs.

She developed fundamental approximation algorithms, developing new algorithmic techniques for the use of linear programming and rounding in network design problems. The applications of her work include solving problems in facility location, network routing, and the spread of influence in social networks. Tardos also played a key role in founding the field of algorithmic game theory by developing algorithms in the presence of self-interested agents that are governed by incentives and economic constraints.

Her pioneering work using game-theoretic ideas to quantify the performance gaps between centrally managed network traffic and the flow of traffic directed by self-interested agents (selfish routing) was recognized with the Gödel Prize. She subsequently developed new approaches to analyzing dynamic games and new algorithms for mechanism design including composable ones.

Tardos is an outstanding educator, mentor, and leader in her scientific community. She has received awards for excellence in teaching and leadership for her work supporting women in computer science, and several of her former students are now prominent figures in the field. She co-authored one of the leading textbooks used in undergraduate computer science, Algorithm Design, and co-edited Algorithmic Game Theory, a significant book at the intersection of economics and computation.

“Each year ACM honors a preeminent woman computer scientist as the Athena Lecturer,” said ACM President Gabriele Kotsis. “Athena Lecturers are recognized for both enduring technical contributions, as well as their community service and mentoring. Éva Tardos has played a central role in shaping the field of algorithms over three decades, and she has been one of the foremost authorities in the emerging field of algorithmic game theory. Her work, her generosity to younger colleagues, and her service to the wider field have been outstanding. We look forward to presenting her with this award and we know she will continue to make contributions for years to come.” 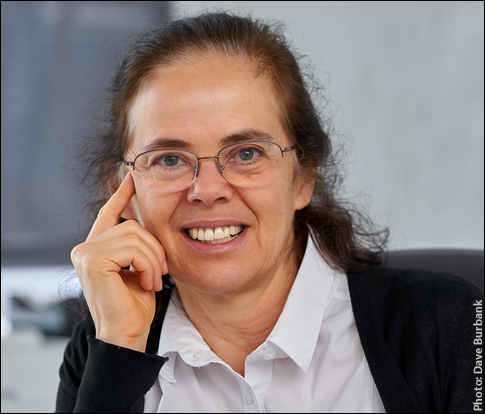 Tardos earned Diploma and Ph.D. degrees in Mathematics from Eӧtvӧs University, Budapest, and later earned a Candidate degree from the Hungarian Academy of Sciences. She has authored more than 100 publications on topics including approximation algorithms, mathematical optimization, algorithms, network planning and design, and theoretical computer science.